« rabbitmq-tracing - a UI for the firehose
PubSub huddle »

That’s why a new project was born: SockJS - yet another WebSocket emulation library, but this time done right. SockJS has ambitious goals:

It may sound obvious, but the WebSocket API is actually quite good. It’s an effect of a tremendous effort led by Ian Hickson and others. It’s shouldn’t be forgotten that there were earlier, less successful attempts to achieve a similar thing - the WebSockets API wasn’t developed in the void.

Yet, I haven’t seen any Javascript library that tries to emulate this API closely. Early Socket.io attempted that, but it has evolved quite far away by now.

WebSocket doesn’t define a server side API, but it’s easy to come up with a scheme with similar ideology and abstractions as the client side.

SockJS does support cross-domain communication out of the box. You can, and should, isolate SockJS server and host it on a different domain than your main web site. There are multiple advantages of this approach and, frankly speaking, it’s just the only sane deployment strategy.

Single SockJS server capacity is finite. If you are anticipating that a single server will not be enough for your needs - take a look at the scaling scenarios below.

Use multiple domains for SockJS servers

The simplest solution is just to put every SockJS server under a different domain name, for example sockjs1.example.com and sockjs2.example.com, and allow clients to pick a server randomly.

Use a WebSocket-capable load balancer

You can choose to host all the SockJS traffic under one domain and use a decent WebSocket-capable load balancer to split the traffic. There is a sample HAProxy configuration file which can be a good starting point.

Use almost any load balancer

This is not a preferred solution, but it’s possible to run scalable SockJS even in environments where the load balancer doesn’t support WebSockets. Shared hosting providers are like that - for example CloudFoundry. In order to make connection establishment faster you can disable WebSocket protocol both on the client and server side. In such an environment load balancer must forward all requests for a single SockJS session to a single SockJS server - the load balancer must support sticky sessions (session affinity) in one of two variants: 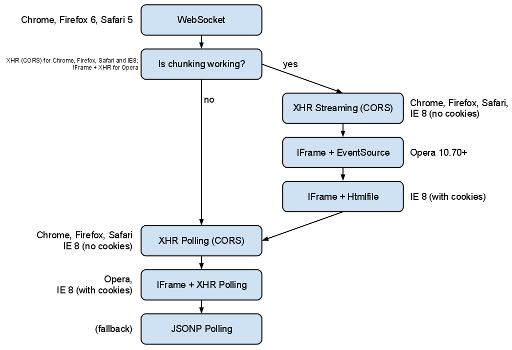 Apart from native WebSockets, SockJS comes with the support for few carefully chosen transport protocols, and all of them support cross-domain communication. The basic idea is that there should be a decent streaming and polling protocol for every browser. The polling ones must work work in environments with restrictive proxies and support old browsers. There are three ways every browser can establish connection:

WebSocket is the fastest and best transport protocol, it supports cross-domain connections out of the box. Unfortunately it is not yet widely supported by browsers. Also, some browsers may have problems with proxies (for example, Firefox WebSocket implementation won’t work through the majority of the proxies). It’s going to take some time before the browser vendors agree on the protocol and proxy handling.

Streaming protocols supported by SockJS are based on http 1.1 chunking - it allows browser to receive a single http response in many parts. A great example of streaming protocol is EventSource or streaming over XHR (ajax). Messages sent from the browser are posted using another XHR request.

Every browser supports a different set of streaming protocols and they usually can’t do cross-domain communication. Fortunately SockJS is able to work around that limitation by using an Iframe and communicating with it using an Html5 PostMessage API. This is quite complex, but fortunately it is supported by the majority of the browsers (with the exception of IE7).

SockJS supports few good-old polling protocols for ancient browsers (including IE7). Unfortunately these techniques are quite slow, but there is not much that can done about it.

Polling transports can also be used in situations where proxy on the client side doesn’t support WebSockets nor http chunking- it is required for the streaming protocols.

Connection establishment should be fast

If the browser supports it SockJS first tries to open a native WebSocket connection. Depending on a network and server setup it may work or fail. The failure should happen quite fast, unless the client is behind a badly misbehaving proxy - in such case it can take up to 5 seconds to timeout.

After WebSocket transport is ruled out, SockJS opens XHR request that intends to check if chunking is supported by the proxy. It’s not that unusual to meet proxies that don’t support http chunking. Running streaming protocol in such environment will fail with a timeout. If chunking is working fine, SockJS chooses the best streaming protocol supported by the browser. In the other case, polling transports are used.

All that, depending on the browser, can take between 3 or 4 round trip times from the browser to the server, plus a DNS request. Unless you’re behind a broken proxy or live in Antarctica it should be quite fast.

This is one of the reasons why SockJS avoids using Flash transports - Flash connection can take at least to 3 seconds if port 843 is blocked.

Client-side Javascript must be reasonably tested

SockJS is quite young and testing is not yet done properly. That said, we have multiple end-to-end QUnit tests. At the moment are deployed in few places:

Server side code should be simple

At that point SockJS-node implementation is using about 1200 lines of code in CoffeeScript. About 340 are used by WebSocket protocol, 220 by a simple http abstractions and only around 230 are used by core SockJS logic.

The SockJS protocol used between the browser and the server is already quite simple and we’re working on making it even more obvious.

We do intend to support at least Node and Erlang servers and we would be pleased to see Python and Ruby implementations as well. SockJS is intended to be polyglot.

SockJS is quite young and there is loads of work remaining to be done, but we believe it is stable enough for real applications. If you’re planning on doing realtime web apps, give it a try! (Article also published on github pages)